Could your business use an extra set of volunteer hands? 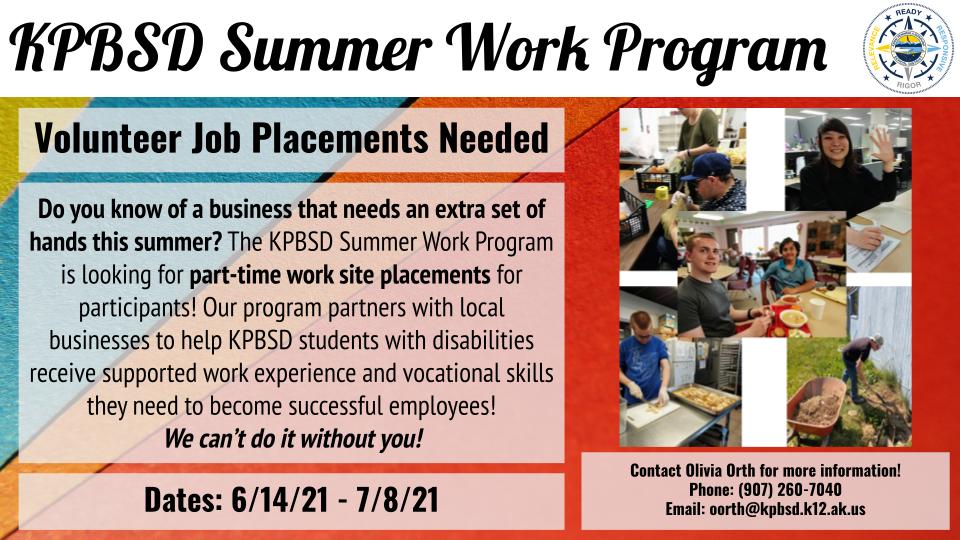 To assist KPBSD students with disabilities receive supported work experience and vocational skills they need, KPBSD seeks business partners in the central peninsula area, June 14 – July 8, 2021. 2021 KPBSD SUMMER WORK PROGRAM Are you a business in need of an extra set of hands this summer? Consider becoming a work site for […]

Community partnerships: a habitat for learning

Tebughna School students bundled up to wade the frosty streams of Tyonek in exploration of baby salmon habitat. Just outside their school building, juvenile salmon flourish in small streams and ponds before heading out to the saltwater to hopefully later return as big, delicious table fare. In a partnership with Project GRAD Kenai Peninsula (PGKP) […]

Everyone can learn, starting with newborns!

News Release Developmental Screenings for newborns to age five in Seward and Soldotna areas Empowering all learners, starting with newborns! Soldotna, January 12, 2018—Free opportunity for a screening to learn a child’s early development, motor skills, speech, early learning concepts, vision, and hearing for children ranging from newborn to age five (not yet in kindergarten) […]

KPBSD’s second Upstream Academy in October expanded to include students from both Title VI and Migrant Education–this brought a new dynamic and an element of cultural diversity and sharing to the academy! Students from Kachemak-Selo joined other migrant students from Homer, Soldotna, and Sterling and were able to share their lifestyle and culture with our Title […]

Meet Chris Mburu, be inspired by A Small Act

Creativity, Assessment, and Learning in a Small School Classrooms August 3 – 4, 2017 Project GRAD Kenai Peninsula (PGKP) organized and partnered with KPBSD to present a two-day professional development training and conference at Land’s End Resort on August 3-4, 2017. Due to travel costs and logistics, it is difficult for teachers in these rural […]